Dennis Mutton was one of the founding fathers of the Governor's Leadership Foundation Program and the inaugural Treasurer of the Leaders Institute of SA; a position he held for 5 years until his retirement from the board. Dennis had a long and distinguished career in the South Australian public sector and industry. He was a former chief executive in several government departments, and also held positions as Deputy President and Commissioner of the Murray Darling Basin Commission.

The Dennis Mutton Award was instigated by the Leadership Institute of SA to recognise GLF Alumni who have demonstrated outstanding contributions to the community through leadership beyond self. 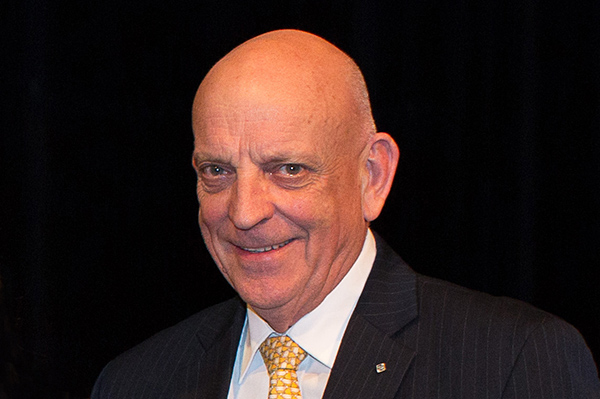 To apply for the individual or group award please complete the respective application forms:

As founder of the Welcoming Australia movement, Brad has played a major role in changing attitudes towards refugees and migrants... Read more

Tracey won The Dennis Mutton Award for her work in continuing a project started during her GLF year. She designed a youth-based volunteer program where students enhance their personal ... Read more

After her GLF year, Tracy has been heavily involved in mostly volunteer basketball coaching positions from grass roots to elite levels while also employed as a Sergeant with SA Police.... Read more

This Community Action Project (CAP), developed during the team’s 2013 GLF year, aimed to help women leaving prison by assisting them to re-engage successfully with their community. Wor... Read more

After her GLF year, Alison Rogers started a filmmaking business, Living Stories, which captures stories that influence and increase understanding and empathy. Alison has been a committ... Read more

This Community Action Project (CAP), developed during their 2013 GLF Program year, aimed to help increase the representation of women in elected roles in local government. In 2013, wom... Read more

Aaron Stuart is an Arabunna man from north of Adelaide. He has a role as the Operations Manager – Indigenous Strategy & Planning with Centacare Catholic Family Services. He is also an ... Read more

This group of 2011 GLF Program graduates worked with the not-for-profit organisation Children of Mentally Ill Consumers (COMIC). COMIC’s role is to advocate for, and raise awareness of... Read more

Leigh works for South Road Planning Study as a Project Director. In his spare time, he has been working very hard to develop a transition town - Transition Gawler - and worki... Read more

Annette received the Dennis Mutton Award in recognition of her substantial contribution to the community, predominantly the formation of The Torrens Valley Education Fund, a not-for-pr... Read more

Aaron was awarded a Certificate of Merit in recognition of his efforts as Chairman of the Arabunna Native Title and a member of the South Australian Aboriginal Advisory Council and Sou... Read more

Elizabeth received the Dennis Mutton Award for her extensive and innovative work in supporting and connecting communities of people living with a disability, and in particular, for her... Read more

Brad has made a substantial contribution to a vast range of charities and community initiatives, many of which he personally established. His involvement covers sporting groups, sports... Read more

Cindy was recognised for her important work with the Spina Bifida & Hydrocephalus Association over the previous 4 years. As President of the association, Cindy has been instrumental in... Read more

Jennifer was awarded for her work to develop a Community Boards Program in partnership with the Community Business Bureau (CBB). The program matched interested GLF Program graduates wi... Read more

Craig was awarded for his work in establishing the ‘Follow your Dreams’ initiative in which GLF Program graduates attend schools in the northern suburbs of Adelaide to motivate and ins... Read more

Mark was recognised for leadership given to the community as City Chair of the Red Shield Appeal and being responsible for the coordination of this fundraiser for the Ingle Farm area.

Elsabet initiated the Australian Leadership Program for Africa (ALPA) to build leadership capability in organisations in Africa and created an alumni support base for individuals to im... Read more

Michael initiated the PHONES program,which helped provide second-hand mobile phones to police who then gave these to victims of family violence as a practical aide to their personal sa... Read more

Walking in her neighbourhood, Kate Rush noticed a very faded plaque acknowledging Aboriginal people as traditional land owners which inspired her to put a similar sign on the fenc... Read more

David was honoured with the Dennis Mutton Award  for his work as a volunteer Board Director for STTARS – Survivors of Torture and Trauma Assistance and Rehabilitation Se... Read more